And Now We Have Bees!! 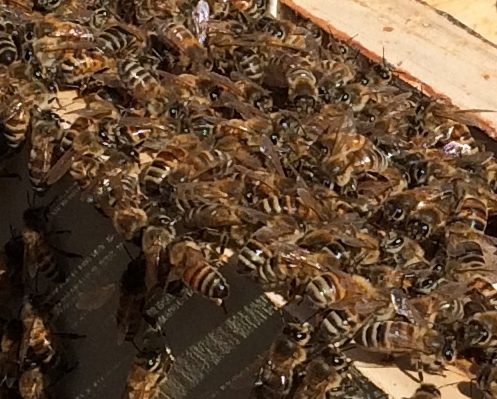 I have been wanting bees for several years now. We used to live up town in a small duplex with an 1/8th of an acre yard. I wanted bees then but didn’t feel like we had enough space to have a hive and not get stung daily. We now live on an acre and have some room to spread out. We have been expanding our farming endeavors and decided that this spring would be the year we get bees.

When out to dinner with some friends one night I expressed my desire to get a few hives this year. These friends, and neighbors, happen to have several hives of their own and were excited to hear that we wanted to take on this challenge too. They were more than happy to share knowledge and help us get started with our own hives.

I assumed I would be going the traditional route to get bees which includes purchasing all of the beekeeping equipment, clothes, hives, tools and of course bees. Bees come in a nuc short for nucleus hive that is made up of a queen bee and about 15 thousand bees. (Sounds like a lot I know!!) The bees come with a few frames from an existing hive so they have everything needed to live as they expand and grow their colony in a new hive box. There are a few brood frames (full of larva) as well as frames with honey, pollen etc.

Then near the end of February we had a big wind storm. It is always windy here, some days more than others but very strong winds are a common thing. In this windstorm an old tree in our community park was blown over. In the base of this tree was an active beehive. I had known about the hive in the tree since the summer before, but now the hive was exposed. You could see right up into the hive. It was really cool!

I thought, that if it was possible, that it would be amazing to be able to harvest and relocate this colony into a hive and that is exactly what we did! With the help of my beekeeping friend, and the county bee inspector, we took the log apart and moved the colony into a Langstroth hive.

I had no idea how this would go down. I have been reading up on bees and the care of hives, but reading and hands on experience are two different things. We suited up in full bee suits and proceeded to saw and chop the log open.

When the hive was completely exposed we started searching through the comb and bees looking for the queen. It was important that we find the queen so that the colony would follow her into the hive. We searched all throughout the rotten long and the ancient comb within it but never could identify the queen.

All the while as we were searching for her, we also were removing parts of the comb that were still in use. Some parts of the comb still had honey in them and other areas were full of larva. We put these still useful parts of the hive and put them into empty frames and held them into place with rubber bands. Once we had about 5 frames full we decided that would be enough to get them started in the hive box.

We shook off the bees that were crawling all throughout the comb into the hive box and more began to congregate there. They seemed to be accepting it as their new home.

The colony itself was pretty weak. I though it looked like a lot of bees, but the bee inspector said it had less than a third of what he would have hoped to see in a hive of that size. Since we didn’t ever identify the queen, we just had to hope that we caught her. The success rate of this colony taking to this new home and not only surviving but thriving is greatly diminished if the queen was not with them.

I left the new hive sitting there where their old log had been until sundown. This gave a chance for all of the forager bees to come back and find the new home. After dark, I moved the hive in the back of my truck up to our duplex which is a couple of miles away. I needed to do this because our farm is only a short distance from their original hive and the colony would most likely abandon this new home in the morning if they could still smell their old home.

Here’s hoping all goes well and that they accept their Langstroth hive as their new home! Wish us luck that this hive takes!